Cloud storage has become ubiquitous in our data driven world. We truly live in the information age, and cloud storage has decreased in price so much that it has become extremely cheap. Sometimes you can get a monthly subscription that costs less than a greasy fast food combo meal at your local fast food chain. On the other hand, there are some providers that try to position themselves as the ‘premium’ or ‘quality’ option in an industry littered with hundreds of competitors.

Today we’re going to be looking at the best cheap cloud storage options, but before we do, I’d like to point out a couple caveats.

There’s an old adage that says “you get what you pay for.” Basically, it means that if you pay the bare minimum for a product or service, the quality of that service isn’t going to be acceptable. However, that’s not strictly true, though with a few of the services I’m going to show you, the old saying holds up.

You must understand that one of the factors that influences how a provider set their pricing model is how much money the invested developing their service. Application programmers and network engineers aren’t cheap, and many cloud services go the extra mile to develop software with the latest and greatest features to put themselves a step ahead of the competition. 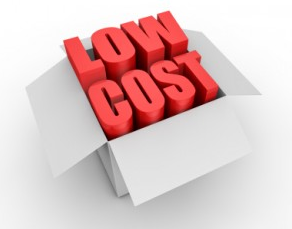 But the more they invest in development, the higher the price. To make a blanket statement, generally you’ll find that the cheaper services don’t offer nearly as many features as the mid to high-end services. Sure, there are exceptions to the rule, but Amazon Glacier, which is one of the cheapest storage options available, is notoriously bare-bones in its design.

We’ll dig into Amazon Glacier later in the list of providers, but let’s go ahead and use them as an example to better illustrate the price versus functionality dilemma. Amazon Glacier is really more of an archiving service than it is a cloud storage service, but it’s dirt cheap, and adheres to the following analogy. Think of the data on your phone like boxes in your basement.

Your basement (e.g. your local computing device, PC, mobile, etc.) has a finite storage space. Once the basement is full of boxes, you have to invest in an offsite self storage unit. As you sift through your data, you find a lot of personal items that you can’t bear to part with or throw away (e.g. delete), so you decide to haul them off to the storage container since it will be rare that you’ll ever interact with them again.

In a sense, Amazon Glacier is the self storage container. It’s best for saving and archiving data that you don’t want to delete, but you won’t regularly use. So, it’s a great place to store copies of backups (assuming you’ve encrypted them, of course), and other personal data like media libraries. And believe it or not, it’s one of the cheapest options on the planet, at a rate of only $0.01 cents (yes, one penny) per gigabyte per month.

However, it’s interface is rather limited, and it doesn’t include any advanced features like automatic backups, syncing services, and other cool features. Instead, it’s really just raw storage space, and a great option for those looking for dirt cheap ‘cold storage.’ Also, I’d like to point out that the number one guiding factor in determining the best services for the purposes of this article is pricing.

There may be many better alternatives in terms of security, features, backup options, and so on, but these providers are going to focus mainly on low cost. Now that we’ve got an understanding of some of the cheap storage nuances, let’s take a look at the best cheap cloud storage providers.

I’d have to rate Amazon Glacier as number 1 in this list. Though I don’t care for their features (or lack thereof), remember that this list is analyzing the best cheap providers, and you’d be hard pressed to find another service as cheap or cheaper than Amazon Glacier. As mentioned already, you can get their storage service for only a penny per month per gigabyte, which is cheaper than dirt.

However, don’t expect any fancy features or slick software. It’s really a stripped down service that only focuses on raw storage. You won’t get any fancy file sharing, syncing, collaboration, or backup features. Still, it’s great for archiving old files that you don’t need immediate access to.

Google Drive is pretty darn cheap as well. First off, note that they offer up to 15GB of free storage, which is more free storage than most other providers offer. In addition, you can purchase 100GB of free storage for only $1.99 per month. Users who still need more storage can get a whole whopping terabyte for only $9.99 per month. As you can see, they are extremely low priced. They even have great features like file sharing, read-only permissions, collaboration, and and in-browser document editor.

But I must warn you: Google Drive should not be used to store personal or sensitive information without the aid of a file encryption app. After Edward Snowden blew the whistle on the NSA, it was discovered that Google had been coerced into allowing the federal US government to capture their users’ data. Though we don’t know for certain, many speculate that the NSA still has their fingers in Google’s user data. Nevertheless, from a perspective focused solely on price, Google Drive is clearly a low cost option.

Yet again, I have to caution you to avoid storing sensitive personal information with Microsoft OneDrive. They too have suspicious ties to the NSA, and have allowed them to collect customer data. Plus, Windows 10 is notorious for being intrusive and collecting more data than it should. Microsoft OneDrive, like Google Drive, shouldn’t be used unless you encrypt files on your local machine before uploading them.

Dropbox offers pricing that’s very competitive with Microsoft OneDrive and Google Drive. They do have a free plan that offers 2GB of indefinite storage space. You can get a full terabyte of storage for $9.99, which brings them level with Google Drive’s terabyte pricing option. I would also like to mention that they are much more feature-rich than Amazon Glacier.

With Dropbox you can sync files, generate download and upload links for sharing, and take advantage of automatic backups. But once again, I have to warn you about their security. They are not a zero-knowledge provider, and they have made many headlines due to inadequate security. In fact, Edward Snowden recommends that you abstain from using Dropbox. So make sure that you don’t store any personal files without first encrypting them locally with a utility like TrueCrypt.

Last but not least is iDrive, which is even cheaper than Google Drive and OneDrive. You should note, however, that iDrive is really more of a backup service, though they do provide plenty of space to store files online. They offer 5GB of free storage and backup space that can be used indefinitely. In addition, you can get a 1TB personal account for as little as $4.33 per month, which is $52 per year.

In addition to fantastic mobile apps and the ability to backup unlimited devices, iDrive even has sharing and syncing tools. If you need a service to help backup data, I’d recommend iDrive over the previous options. And I would also like to point out that they’re extremely secure, and even offer client-side encryption.

It seems that most of the dirt cheap options usually come with strings attached. For instance, Amazon Glacier has pretty poor file transfer mechanisms, and they don’t have an interface anywhere near as developed as the more expensive cloud storage providers. In addition, you’ll find that some of the cheaper options aren’t as trusted as some of the higher priced services.

Google Drive and Microsoft OneDrive have sketchy ties to the NSA, and a lot of people distrust them (and I’m talking about sane, rational people, not conspiracy theorist nutcases!). iDrive is the most secure provider mentioned here, offering a nice blend of low cost, great features, and top-notch security. I’d recommend trying their free service to see how you like them. If you do decide to opt for another provider, please remember to encrypt your data locally before uploading it to the cloud.