JustCloud is yet another competitor in the cloud storage space. But if you thought all cloud service providers were the same, you’d be dead wrong. In this review, we’re going to take a look at the good, the bad, and heinously ugly aspects of JustCloud, who offers a cloud storage service that supports multiple platforms. They tout options such as a simple and easy to use interface, 100% automation, and encrypted/secure data. In addition, they provide both desktop and mobile applications, and they certainly aren’t the most expensive provider. But are they right for you? Well, perhaps, but let’s take a closer look at the drawbacks of their service before you make a decision.

Privacy is also a massive priority concern of almost all new cloud data storage users looking to take the plunge away from physical storage for their sensitive and private family pictures, videos and files. JustCloud is vague on their website as to the type of encryption used to secure users’ data, however, as we’ll discuss in detail in the security section. Although your typical file sharing links are available, the service mainly focuses on providing private data storage solutions for home and business users, including features for backups and scheduled synchronization of your important folders and emails.

You can get a feel for JustCloud with the trial account limited to 1GB. From there the plans scale up depending on your needs. Personal and Business plans are offered separately. Their Home plan offers 75GB of data, the second plan this service offers is their Premium plan which includes 250GB, and lastly the Unlimited plan for those whom have very large amounts of data to backup and store. The tiered storage system adds features with more expensive packages, while the discounted offers savings on long term plans.

But how do they stack up against the competition? For their price, users would expect them to be full-featured. They’re not the most expensive provider in the cloud storage market, but they certainly try to upsell users on extra features. Not only is this a questionable business practice, it can be downright irritating. If you’re going to pay a monthly fee for their service, it had better be fully functional (with exception to some tiered pricing packages). The following list outlines some of the features that they try to upsell users on, charging them extra for these benefits:

Oh, and get this. Without purchasing an extra feature, the software only has the capability to run daily backups. If you want hourly backups, it’s going to cost you. Overall, I was extremely disappointed with the fact that all of these features cost extra money. The vast majority of other competent cloud storage providers include all of these features as a standard part of their service, and not as an extra add-on.

JustCloud offers cloud backup with sub-features such as scheduling and advanced syncing, idle backup and more. You can use the service from almost any type of device, including mobile, and sync data between devices. However, there are some issues with the syncing service, as we’ll discuss next. Users can easily drag and drop or select files to back them up to the cloud and automatically sync your devices on paid plans, which includes unlimited data storage options. 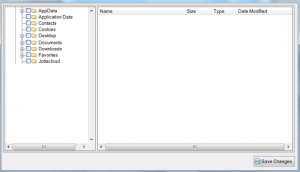 Users can quickly sync multiple devices including PC and mobile, allowing you to access shared data from the office, home, or on the go. This means you can have access to all your important files on your smartphone, desktop, tablet and laptop, allowing you to work on projects from anywhere without having to carry saved files on flash drives. Additionally, you can choose which folders to sync and where, allowing you to automatically backup all your data. Mobile and Desktop apps are available for Windows, Mac, Apple, Android, BlackBerry and Kindle.

There’s just one problem. By default, the syncing feature is limited to 2GB of data. This can be a real pain, and I’d imagine that the average user has more than 2GB of data they wish to sync with all their devices. If users want more than 2GB of syncing capabilities, they have to pay extra, and this feature can only be expanded to 5GB.

Users can schedule backups from multiple devices simultaneously or separately allowing you to program backups during off-hours or when devices are idle. You can even back up e-books from Kindle, and emails directly from Outlook or other mail programs. In addition to having all your devices automatically backed up, JustCloud’s service stores multiple redundant copies on their protected database, limiting the possibility of lost data to almost nil. One odd thing to note is that video files require an additional fee to apply for automatic backups. I found this to be a bit confusing.

JustCloud offers basic file sharing capabilities similar to DropBox, allowing you to share files and folders with friends and family through custom links, email, Twitter and Facebook. The trial only allows for 1GB files to be shared, but paid users can share large files to collaborate on projects.

File versioning, on the other hand, allows you to access old copies of the same file. However, the service is available on a 14-day trial and would require a 30-day to unlimited subscription. This can be a good feature for work projects that are regularly updated, allowing you to recover old content that may have been accidentally lost or overwritten.

A really cool and unique feature is the Lost Laptop tracker that tracks your laptop hourly on a map, allowing you to trace its’ location while allowing for a full recovery of your files. I found it odd that they include this service, since this isn’t a typical or standard feature with a lot of their competitors.

Security is typically a standard feature with any cloud service, but they were surprisingly vague on their website – which causes me to worry in light of all the negative reviews their security has garnered. You see, most cloud services perform two kinds of encryption. One round of encryption to secure user data while it is in transit through the public Internet, and then a stronger form of encryption to secure data as it sits in storage on their servers. And even though they claim that their data is secured with encryption, the truth might shock you.

It seems that they only encrypt user data while it is in transit to their servers, and not once it is stored on their servers. This is a massive security flaw. This gives rise to the possibility that a rogue employee could potentially access user data. On the one hand, if you’re storing inconsequential information such as your music library, you may not care if it isn’t secured. However, I would imagine most people would feel unprotected, and more often than not users have data that they wouldn’t want to risk being seen by others.

To test out the speed of their service, I backed up a 50MB folder that contained mostly music files. Also, understand that I use an ADSL Internet connection with 5MB download capacity and approximately 1MB upload, which isn’t anything extraordinary. And I found the speed to be adequate, only taking about four minutes. They supposedly have a speed test utility on their website, but when I visited, I received a 404 error. So all in all, sounds pretty good, right?

Well, not exactly. Unfortunately, it does seem that they perform some amount of bandwidth throttling, though I don’t know the specific rates (their website is very vague in several areas). I say this because there is an extra option to “supercharge” backups and increase the speed. Yet again, I find this disappointing and fell that unlimited bandwidth should be standard.

The service allows for automated scheduled backups programmed within the app installed on your various devices. Of course, selective drag and drop is also an option. They also support all file types from videos, movies, music, photos, PDF, email and more. The process is streamlined and easy to setup even for beginners. It should be noted, however, that backing up from external hard drives requires an additional charge, in the same way that backing up video files also comes as a paid option. Again, I feel that this is a little subpar and that there are better backup service alternatives.

As you would expect of any other backup service, they also provide a restore feature. This is crucial if you have accidentally deleted or overwritten files or folders. You can also utilize secure FTP protocol to manage and access your drive for better accessibility. As mentioned above, optional file versioning is available for 30 days or for an unlimited period. This feature is imperative for workers that collaborate or frequently update files, because they often need the ability to revert saved changes and deleted files to previous versions.

Like other cloud storage and backup services, JustCloud offers 24/7 customer support that can be initiated through e-mail or a phone call. Admittedly, they do a good job of hosting a knowledgebase and video tutorials on their website, too. The Help Center page also provides a FAQ section. However, their customer support has garnered some bad reviews in which people complained that a customer service representative wasn’t personally knowledgeable, and was just following a script and list of troubleshooting procedures.

In the end, JustCloud is a simple cloud storage and backup service that suffers from several flaws. Subjectively, I would claim that they don’t offer as great a value as many of their competitors. The main reason for this claim is due to their security system and the fact that they upsell customers on a lot of their features – features that come standard with other services. Although, they’re not completely worthless.

JustCloud is best suited for people who have files to store that are inconsequential and doesn’t matter if the data becomes compromised. For example, most people wouldn’t care if media files like videos or music became compromised. On the other hand, if you have any amount of personal information that needs to be backed up, I would highly recommend another service since competitors offer more features. And some competitors are even cheaper than JustCloud. In summary, here are the pros and cons of JustCloud.