Viceversa Plus is yet another backup software solution, and it’s the earlier version of Viceversa Pro. It does have it’s merits, but I wouldn’t recommend using it unless you have some very specific requirements. Instead of just crossing your fingers and hoping that it’ll do everything you need it to, we’re going to pick apart this service piece by piece to see how well it stacks up against the competition.

But before we dig any deeper, you need to know one crucial factor concerning this software: it is only supported on legacy Windows systems! Basically, it’s only going to work on ancient computer systems that are as old as the dinosaurs. So it really isn’t a good fit for anyone using a modern Windows installation, a Mac, or a Linux system. In fact, it only supports the following operating systems: Windows XP, 2000, Me, 98, 95.

It’s weakness is its only real strength, depending on how you look at it. Though they are few and far between, there are plenty of people who still have old Windows XP (or earlier) systems lying around. Whether you bought a computer at a garage sale or want to backup data on an old computer, many of the modern backup solutions don’t support these operating systems. So if you’re using a Windows system newer than Windows XP, you need to check out Viceversa Pro.

Viceversa Plus is end of life and end of support. As such, I would have expected it to be free. After all, who wants to buy software that isn’t updated or supported? And I found it even more strange that it isn’t very cheap. The price plans are as follows:

I’m really quite curious to see how many copies of this software they’re still selling, because not too many people still sell software for legacy Windows systems – but there you have it. You can try it free for 30 days, but as they say on their website, “The PLUS version will be discontinued soon.”

Given that Viceversa Plus is for older systems, it’s only natural for it to be a watered down version of Viceversa Pro. To be frank, many older Windows systems don’t have advanced packages and enough hardware resources to accommodate all of the advanced features we come to expect in modern backup software. 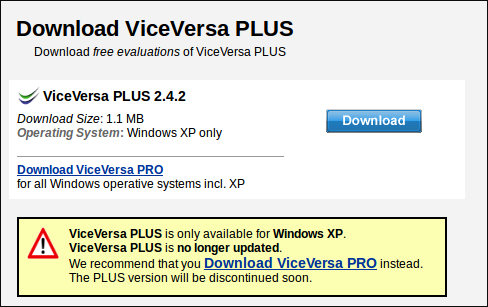 That said, it does have some basic synchronization features to help files remain the same across multiple devices. In addition, it has replication features that allow it to effectively “copy and paste” files across a network medium to another host. It will only copy the changes in files and folders to help alleviate network burdens and bandwidth constraints, too.

In addition, they provide raw data backup solutions for external media such as USB drives, external hard drives, to the LAN/network, to NAS, and to a CD/DVD. There’s also an operation preview option, which will help a user review all of the settings and configuration choices before executing a command. And with the Plus version, users can include or exclude individual files and folders from various operations, making it reasonably granular.

Last but not least, it has a rather detailed logging system that helps track and timestamp different file operations and backup activities. This will help users ensure that their backup completed successfully, or lead them down the terrible path of troubleshooting should they run into errors. And…that’s really about all it can do. Like I mentioned previously, this is a pretty darn small and simple piece of software. In fact, the downloadable installation file is only 1.1MB.

I’m not going to sugar coat it – the interface is horrendously ugly, and not very streamlined. Part of this is due to the fact that older operating systems didn’t have the processing power or libraries of code to make sleek and sexy Windows interfaces. I think most people would agree that legacy icons, text, buttons, and so forth look pretty clunky. 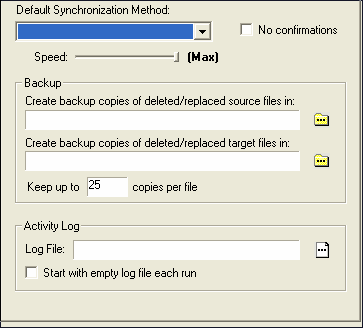 Support really isn’t an option for this backup utility, either. As stated previously, the software is end of life and end of support. They claim on their website that it won’t be available for purchase much longer, either.

To be brutally honest, I really don’t see much value in Viceversa Plus. I’d highly recommend abstaining from purchasing software that is near the end of its life, but it could be critical in extremely rare applications. Since I don’t regularly use any of the operating systems supported by this software, I don’t have any need for it.

But in many developing countries, small businesses with second hand computers, or retail establishments (where it’s quite common to use extremely old computer systems for basic database and POS applications), it could come in quite handy. Also, sometime people have need for legacy virtual machines, in which case Viceversa Plus could be used to backup and transfer data to a new virtual host.

For all other practical purposes, however, Viceversa Pro is a much more suitable alternative for modern users. All in all, I wasn’t too impressed with this software, and it isn’t even a viable option for most users.