The cloud storage or online data backup industry is enriched with options nowadays. Most of these services are about eight to ten years old and are in stiff competition with each other. The market is expanding rapidly as both demand and supply are rising. As a customer you have to do a detailed study of all the options present in the market and also try their free trials before you make a purchase. We tested out two of the services available and put together a brief review for Carbonite and Dropbox. We hope this helps you in making a better choice for your cloud storage requirements.

Back in 2005, Carbonite debuted in the backup and online storage industry as a partnership between CEO, David Friend, and CTO, Jeff Flowers.

The company grew over the years and now provides both individual and enterprise plans. In 2012, the ASA (Advertising Standards Authority) in UK ruled against Carbonite stating that they had misled customers into believing they were providing unlimited space in exchange for a fixed fee.

Dropbox was founded in 2007 by MIT students, Drew Houston and Arash Ferdowsi. Since then, Dropbox has continued to grow as a file hosting service that offers cloud storage, file synchronization, personal cloud and client software.

With over 500 million users worldwide, it can be used on multiple platforms and devices. Dropbox is available in 17 languages and follows a freemium business model to attract users across the world.

Carbonite is the clear winner here since it offers unlimited space for a cheaper price.

Carbonite prices are all inclusive and contain a wide range of services.

Dropbox is a costlier service, and the space available in the free plan isn’t enough to attract a large number of users.

Dropbox is the winner in this category since it has a much wider fan base in terms of ease of use and also a larger customer base.

Carbonite is simple and intuitive, and can be used by multiple users working in an organization. Organizations can choose between local or machine backup, or even server backup. New users are given a free signup for 30 days to test drive the service and figure out if it suits their requirements. Carbonite installs a client software on your local machine and starts backing up everything on it. This software works in the background continuously and updates any changes that may have been made to existing files.

Dropbox has built up a reputation with their long list of satisfied users. The user interface is simple and mostly consists of drag and drop functionality which is highly appreciated by most users. Dropbox is also known to be reliable in terms of speed and sync performance. Due to its ease of use, the service is popular amongst a wide age range starting from 10 and going up to 80. The one complaint about the service so far has been its poor customer service and inability to deal with problems quickly. Customers have also complained of being unable to cancel the service when they wanted to.

Dropbox is the winner here since Carbonite does not provide support for OSX.

Since March 2016 Carbonite has discontinued file sharing and syncing services. They have taken this decision as a part of their stringent security measures. Carbonite thinks that users may be jeopardized when critical files are shared across multiple devices. File versioning is still an option for Carbonite users and files can be saved for a maximum of three months. It will also store the three most recent versions of a file irrespective of the date. However, this file versioning feature is available only for the Windows platform and currently there is no versioning support for Mac OS.

Dropbox has a simple file sharing process after the initial sign up process. After installing the client on a system, you have to create a dropbox account. Next, you have to sign into this account on all your relevant devices and then share as many files you want. Older file versions are saved for a period of 30 days in Dropbox. If you want to increase the duration, you can install Pacrat (an add on for Dropbox) which will give you access to all versions forever. You can click on ‘Show Deleted Files’ and then hit ‘Restore’ to view old versions of a file. Advanced users are also allowed to view older versions through a cache folder within Dropbox.

Dropbox looks like a clear winner in this category with a lot of additional security features.

Carbonite uses file encryption before the files leave the computer and encryption is also used during the file transfer process, and files are stored in a highly secure data center. The data transfer process is as secure as the processes used for online banking or e-commerce. It uses 128-bit blowfish encryption and SSL for all its sharing and syncing activities as well. The data centers where the files are stored are also guarded 24 hours a day and the server access is controlled with electronic key cards and Pin codes.

Dropbox provides 256-bit encryption and SSL for file transfers. A two step verification process is available for all users as well. More advanced users can take advantage of the TOTP (Time Based One Time Password) or security codes delivered via text messages. 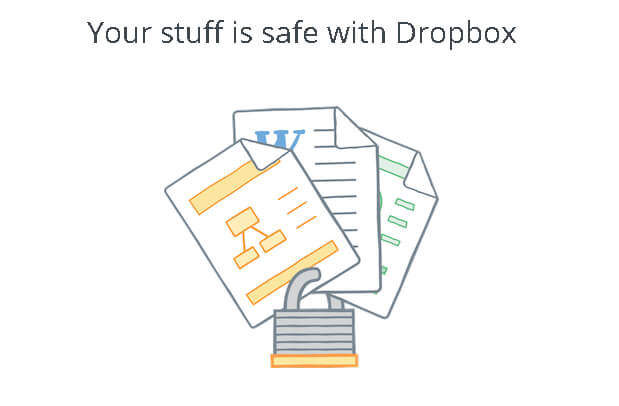 All Dropbox files are viewable to only those who have a link to that file. For higher security measures, there is a third party app which allows users to delete data remotely in case a device is lost or stolen. Finally, you can set expiration dates for documents or files if you don’t want them to fall into the wrong hands.

Dropbox is the winner in this category since it even provides Linux and Windows Mobile support.

Carbonite provides support for various platforms which include the following:

The above comparison can be summarized as follows:

This comparison highlights the pros and cons of both services and makes Dropbox out to be the clear winner. In almost all the categories, such as ease of use, features, security, and software compatibility, Dropbox very clearly outdoes Carbonite. However, Carbonite has a very attractive price point which can draw in many users who need that much storage. We hope this review will help you choose the right cloud storage service for your requirements. If you have any questions or input, let us know in the comments section below.