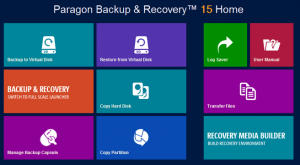 Paragon Backup and Recovery is yet another free backup solution, and they even claim to be, “The most powerful free backup solution ever!” While I commend their hubris, we’re going to take a closer look at their service and dissect its features to see how it stacks up against the competition.

The entire price plan can be summed up in one word: free! However, there are a few things that bear further explanation. I was pleased to find out that they didn’t regularly try to upsell me on another product. Often times these types of free services will regularly post some type of pop-up add that encourages another one of their products. Not only do they respect users by not inundating them with these annoying ads, but they also don’t require registration – which is another annoying tactic freeware providers often employ to grow their email lists.

Users should note that this is primarily a backup service, as opposed to other all-inclusive services that provide cloud storage, syncing, sharing, and collaboration features in addition to backups. However, they focus their service on backups, and as such they have a lot of backup features that other providers lack.

While the software only works in a Windows environment ranging from Windows 2000 (who uses that anymore?) all the way up to the latest version, Windows 10. Even though they don’t support other operating systems, the software does support functionality with a wide array of file systems including the following:

Though they don’t allow typical AES-256 encryption or allow zero-knowledge security by letting users manage their own encryption keys, they do protect backups. Again, this is not a cloud service, so file encryption typically isn’t expected (though it would be nice just for an extra layer of security). However, they do hide backup capsule and recovery partitions so they don’t become accidentally deleted or tampered with should another user login to your computer.

I only ran a selective backup to test the speed, and I wasn’t overly impressed. To test, I created a backup of a 135 MB video file of one of my favorite programs. Though other services will take as little as ten or fifteen minutes, this service took a full 32 minutes before the operation completed. To be fair, I do need to defrag my hard drive, but that would only nominally improve the speed. If you have terabytes of data you’re trying to backup, you’d better try to run it overnight or babysit the backup over extended periods of time.

The service has pretty well rounded and full featured backup capabilities. The first, and perhaps simplest option, is the standard disk backup. It will backup and image an entire disk or partition, including the operating system and any data files. But users don’t need to run a full backup each time, because they offer differential backups that only archive changes made since the last full backup. This cuts down on the time necessary to complete the backup considerably.

They also include a backup capsule backup feature that can be stored in a hidden manner on the local disk or on other media such as an external HDD (I’d highly recommend you store at least on copy off the local disk). The backup capsule is bootable and will aid recovery should the file system become damaged or corrupted. And as stated previously, they support just about any file system and hard drive partitioning systems under the sun.

Paragon actually has great data restore features, starting the with most basic feature called a complete restore. Basically, it will allow users to revert their operating system and data files to an earlier point in time without having to reinstall and configure applications. However, they do provide more granular backups that let users pick and choose whether they want to restore a whole disk, individual partitions, or only a select group of files.

They also provide the option to create “rescue media,” which serves the purpose of providing a way to recover a computer if the host operating system has become inaccessible or corrupted. Their backups can be ported to a variety of media including external HDDs, CDs/DVDs/Blu-Ray, or network “backup capsules.” A backup capsule is a section of the hard drive the software will reserve for backups that is separate and isolated from the host OS to protect the backup data. Users even have the option of creating a separate bootable partition on their hard drive.

Paragon offers several different types of customer support. Firstly, they offer “self-support,” which is nothing more than a link to typical how-to guides, knowledgebase articles, documentation, FAQs, and other such typical resources. However, to contact customer support, users first need to create an account in their support system.

Their support services seem to be aimed at enterprises who use some of their larger products, though they certainly provide individual support as well – even for the free software. They claim typically response times are within one business day for 90% of all support cases, not to exceed three business days. But all support tickets are either initiated through email or the web portal. There is no live chat feature or listed support telephone number, which ensures that users first create a support account.

All in all, I was impressed with the software. In particular, I did love all of the extra backup features that give users a high degree of control over backup operations. Also, I think they do a good job of covering all their bases; well, as much as a backup program can. It would be nice to have online backups as an option to give an extra layer of protection through disaster recovery and off-site backups. That said, I think users would be very hard pressed to find a comparable service…for free!