Quality free services are a rarity in any industry – with exception to open source software, that is. A lot of file management and cloud storage services typically bait customers with a ‘free’ service, but impose harsh limitations that only serve to water down the free version. The idea is to get more users excited about their product and hooked on its features, and then to upsell them to the full featured version of their paid subscription.

As such, I’m usually wary when I hear the word ‘free.’ Often you’ll find data caps, bandwidth throttling, and other similar ‘gotchas’ when testing out a free service. But there is one wonderful exception to the rule, and it’s called open source software. Keeping that in mind, today we’re going to be taking a closer look at Free File Sync to see if it’s worth your time – or if it’s a colossal dud.

There’s not much that can be said about Free File Sync’s pricing structure. It’s a completely free to use piece of open source software – plain, simple, and with not strings attached. You don’t need to enter payment card details to sign up for a free trial, and they don’t even have a paid version. It really is genuinely free!

Free File Sync is rather limited in terms of its features, though, so I suppose you get what you pay for. As the name implies, this handy little utility is focused on helping you sync data among various computing devices. The interface is relatively simple and straightforward, and the main sync window consists of two panes that represent each of the devices you want to sync files with. 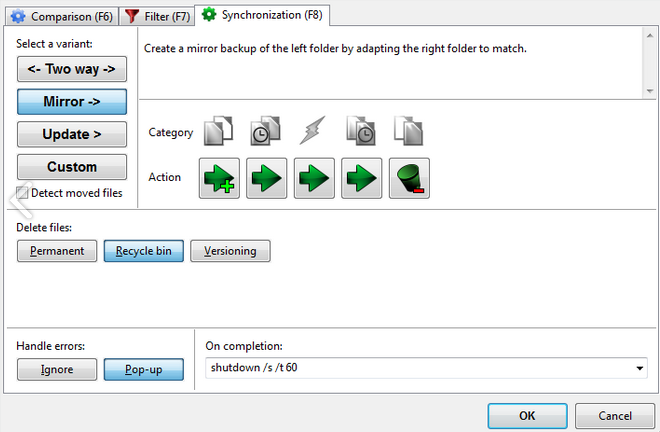 There are four different options you have of syncing your files, too. The first of which is ‘two way’ synchronization. This option will update any changes in a file to the other device, and vice versa. For instance, if you delete a file on device 1, the file will be deleted on device 2. Likewise, if you edit a file on device 2, the updates will be written to the same file on device 1.

Last but not least, there is a ‘custom’ synchronization method, which let’s you define the rules for specific files and folders at your own discretion. However, there is one large feature that this utility is missing. There’s no way in the software for you to schedule tasks, which doesn’t make much sense to me. It seems to me that any good syncing service would naturally come with a scheduler. There is a workaround, however.

All you have to do is use the Windows Task Scheduler and save your synchronization jobs as a batch file. It’s possible, but nevertheless a clunky solution. They do include how-to guides that detail the steps, but it’s extremely unattractive – especially if you’re a novice computer user.

Furthermore, Free File Sync does have a file versioning feature. And this feature can even mark files with timestamps to record their age. Other notable features (they’re rather sparse) of Free File Sync include error reporting, support for very long file path names, macros, and SFTP/WebDAV support.

This is purely a synchronization product, and because it doesn’t actually store data in the cloud, there’s no reason for the developers to include security protocols and algorithms with this tool. It wouldn’t make much sense to include encryption protocols in a tool that simply synchronizes files between two different computers. So if you want your files to be encrypted and secured before you sync them, you’ll need to use a third party or stand-alone tool, such as TrueCrypt.

Naturally, as this is an open source utility, there isn’t technical support – at least not in the traditional sense. They do a good job of providing a fair few how-to guides that will detail the steps of configuring and using the software. In addition, there is a forum where you can go to ask questions relating to technical problems.

But don’t expect a phone number, email-based ticketing system, or live chat feature. That’s just one of the drawbacks of free software. Since they aren’t making any money on selling their program, they can’t pay a team of technical support representatives to answer your questions – it’s not charity after all.

If you’re looking for a free way to sync files between your various devices, then Free File Sync could be what you’re looking for. However, in my opinion, I didn’t really care for the service that much. The interface could use a little polishing, and it didn’t really have hardly any features past syncing files and keeping past file versions.

Also, I think that scheduling jobs is pretty contrived and quite a nuisance. If you don’t want to mess with these settings on your own, I’d recommend using a more full-featured cloud storage and syncing service. You could use a service like SugarSync or Sync.com. Heck, even Dropbox (which is notorious for poor security) has an automatic syncing feature that will keep all of your devices updated without the need of having to create a batch job.

Still, if you don’t mind inconveniences, then Free File Sync can help you save a few bucks.