GFS Backup schemes aren’t often used by average home users, despite the fact that they offer a wealth of benefits. The name stands for Grandfather, Father, Son, which refers to the methodology used to backup data. And the algorithm is actually pretty darn clever. You see, if you continually make new backups, say on a weekly or monthly basis, you’re going to eat up a lot of storage space in the blink of an eye. 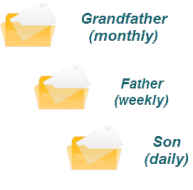 You may be thinking that performing regular backups – even daily backups – helps by giving you plenty of restore points. For instance, if you accidentally overwrote and important file or a nasty virus invades your computer and corrupts critical files, you’ll have plenty of dates in the past to revert to. But believe it or not, GFS provides a method that combines the best of both worlds.

The idea is to group backups into sets based on varying intervals. Allow me to better illustrate the idea with a comparison. Let’s pretend that you are a diligent and technologically savvy computer user, and you don’t want to fall victim to lost data. So, you backup your data every single, just to be safe – and you keep every backup to provide a lot of different restore points to revert to. At the end of only one year, you’re going to have 365 individual backups eating up a ton of storage.

On the other hand, you can use the GFS backup method. Instead of only creating daily backups, you overwrite daily backups, and only keep the most current ones from the last week. That way, you only have 7 days of restore points for daily backups. But in addition, you also make a monthly backup on the first of each month, which accumulates to 12 backups at the end of the year.

Finally, you create 1 yearly backup, just for good measure. Altogether, you now have a total of 20 backups (7 daily, 12 for each month, and 1 annual backup) at the end of the year. Not only does it eat up a lot less space, you still have a myriad of restore points.

GFS and Cloud Backups
In days of yore, the GFS methodology was used to help preserve storage space on expensive and small storage media, such as discs and tape drives. Back in the olden days, storage technology wasn’t nearly as massive or cheap as it is today, so people had to invent clever ways to make the most efficient use of their resources.
Today, however, storage media is pretty cheap. But you may want to implement this scheme if you are trying to conserve space with a cloud backup provider. Some of the basic-level cloud backup services only offer 30GB of storage space, which can disappear after a few backups. Other entry level backup plans are more generous, and provide 100GB of storage – but that’s still not very much by today’s standards.
There are two key ways this can help you conserve cloud storage space. Firstly, by cycling out and deleting older backups, you’ll obviously save raw storage. Now also consider that a few online backup services offer file versioning. A few of them won’t delete past copies of your files within certain periods of time (a few cloud storage providers even offer unlimited file versioning – which doesn’t count towards your total storage allotment).
In a few rare cases, you can even recover deleted versions of your backups, which will give you even more granularity concerning the amount of recovery points you have at your disposal.

Though the GFS Backups system may not be right for everyone, you can use it to effectively manage your backups and conserve storage space. Also, some storage providers offer unlimited free local backups. You could easily implement this system to conserve space on your NAS device or external HDD. Though the GFS archiving system has its roots in business backups, even individual users can take advantage of it to save storage and money otherwise spent on cloud backup subscriptions with higher amounts of storage.